Quite a good day for toys today, although I am not getting as much painted as I would like, I have managed to fing a few new useful figures for the ECW project. Firstly I found these figures mentioned on the excellent and highly amusing blog http://ilikethethingsilike.blogspot.com/ ,( I have half a mind to look the author up if I ever make my intended trip to Massachusetts as I am sure he would be good company over a beer). I ordered the JAMESTOWN SETTLER TOOB by SAFARI on ebay and it came today. There are several useful 54mm seventeenth century civilians contained within as well as a tiny ship (of course people were much smaller in those days, but even so it would have been pretty cramped) and a gargantuan chicken. 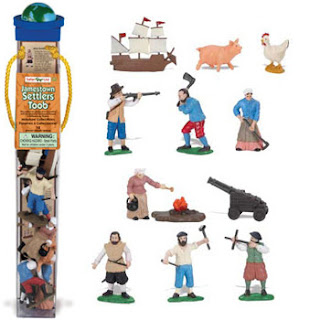 With a little bit of conversion work and a new paintjob this should provide me with some hard to find civilians.

Next a great find was a 54mm figure of Matthew Hopkins which ties in nicely with my current reading material. I was excited to find this fellow and have ordered him from
http://www.greenmangatekeeper.com/pmagic.htm

This chap should provide good material for a scenario or two.
I am off on holiday to sunny Devon tomorrow, but hope to get painting on my return and finish off the Roundhead foot regiment I am working on.
Posted by Springinsfeld at 14:14 3 comments:

Against all odds I have managed to complete my first 54mm building made out of foamboard, cereal boxes and mounted on an MDF base. I must start on the Inn next, If I can't get to the pub anymore, then at least I can build one in my attic 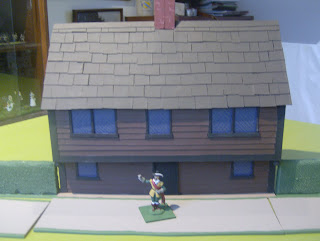 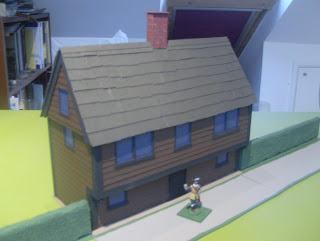 I will be off to Devizes wargames show tomorrow http://www.ddwg.org.uk/Attack.html for a quick scout about the bring and buy. If anyone would like to meet for a weak lemon drink, I will be there mid morning.
Posted by Springinsfeld at 00:23 No comments:

Just a quick post, as I am halfway through building my first 54mm building. I am really wishing that I hadn't decided to do a clapboarded house but it's too late to turn back now.... 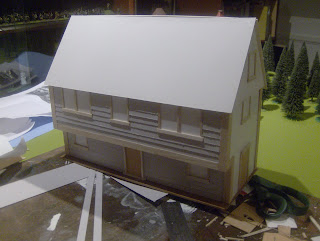 ﻿The house is based on a New England 17th century building as I have just been reading a book about King Phillip's War, and had vague ideas about future skirmish scenarios in that period.
Posted by Springinsfeld at 14:14 No comments:

I'm just recovering from a bad dose of wargamers flit. That is suddenly dropping everything in hand and plunging into a new period. This time I was stricken with a case of ACW, a period I know next to nothing about but have found some fantastic clips of films and re-enactments on Youtube. Having a look around at figures available I can see myself at least painting a regiment up (28th Massachusetts at Fredericksburg), if I can find the right figures in the right pose (Union winter dress in greatcoats running at right shoulder shift).

Onto more homely ground, I have managed to finish another Royalist regiment

MUSIC FROM THE CIVIL WAR

I was delighted on Friday when my good friend and sometimes gaming buddy Speckled Jim, sent me a mail to say he had a spare ticket to see Strawhead last night. I have been a great fan of this band since starting my re-enacting career in 1985 during the 350th Sedgemoor anniversary with the Sealed Knot. I often listen to their albums while painting my  figures and their back catalogue covers a wide range of historical periods from Elizabethan to Napoleonic and beyond.

More relevant to this blog is this album

which contains some pretty stirring stuff, and is just the thing to fire up enthusiasm when the dreaded painters block strikes. Anyhow they put on a great performance at the church in the village of Redwick (just across the Severn bridge) and then came to the pub afterwards for a pint of Reverend James (Brains brewery, and very good). All in all an excellent evening with good company.
For more information about Strawhead and how to buy their albums go to
http://www.strawhead.org.uk/
Posted by Springinsfeld at 12:58 No comments:

As today is the anniversary of the Battle of Lansdown, I thought I would post a few pictures of the battlefield and monument.

There are some quite good interpretation boards installed and markers which tie in with Dr. Wroughton's book (mentioned earlier) quite well.


﻿.
The next photo shows the crest of the hill which the Cornish infantry stormed up mid way through the battle. It is now heavily wooded but in 1643 was quite open
Here on the right hand (looking down the hill) extremity of the escarpment it is unwooded and possible to see the gradient of the hill
﻿The famous monument erected by Sir Bevil Grenville's grandson in 1720, on the spot where he was mortally wounded by a pole-axe at the head of his regiment.
Here is the field at the summit of the hill where the unengaged part of the Parliament army﻿ was drawn up. In the distance is the drystone wall behind which they retreated after the Royalists had gained the hill. Interestingly (at least if you are keen on tumuli and barrows) this field has recently been shown to hold a large Bronze age barrow cemetery (classic positioning on the crest of a hill so the graves would be visible from afar), and it is quite possible that they were in evidence in 1643 providing cover for the advancing Royalist musketeers. There is no trace of them now having been intensively ploughed out but they are visible from the air.
The view of the same field from behind "Waller's wall", with the Grenville monument in the distance.﻿
﻿A detail of the wall, and it is possible to see repairs made using different size stones after Waller had gaps knocked in the wall to allow his cavalry access to charge if needed.
﻿Finally a shot from the left hand extremity of the battlefield (looking down the hill) looking over to Freezing Hill where the Royalists deployed at the start of the battle.
I'm sorry if that was a bit of a lightning tour. Hopefully next year I can get some pictures from the bottom of the valley between Lansdown and Freezing Hill where the ealy stages of the battle took place. Back to the painting table now.

Posted by Springinsfeld at 12:05 No comments:

On this day in 1643, a fierce little skirmish took place at Ham meadow, Claverton. Waller had sent Colonel Burghill's regiment of horse with some commanded foot and dragoons to occupy a walled wood on high ground at Monkton Farleigh. They sprung their ambush and after some initial success were pushed back by the Royalist Cornish foot. (In the eigtheenth century 2 bodies were exhumed in the vicinity one of which still had a piece of shot, possibly from one of Wallers hammered guns, embedded in it's chest).

The Royalists then spotting Waller's force drawn up above Claverton village across the valley sent troops to try and take the bridge of boats the Parliamentarians had built to send their men across the River Avon to spring their ambush. Waller had constructed a small redoubt to defend the crossing traces of which are still visible today

﻿
Here are the traces of the old ford which Waller probably utilised in his bridge of boats﻿. After a fierce fight between the Cornish foot and Parliament dragoons and musketeers the Royalists prevailed and Waller withdrew as night fell.
The different accounts of the ambush vary greatly. The royalist Colonel Slingsby states that the Parliament force lost 100 men and 2 small pieces. John Vicars the Parliamentarian states the losses as 10 men although he concedes the 2 hammered guns were captured, but blames the gunners for that!
The hammered guns in Waller's army seem to be a bit of a west country speciality. I assume that they were similar to frame guns or even large bore muskets on carriages.
Posted by Springinsfeld at 12:13 No comments:

Just back from nipping up the hill to this rather nice field, still known to this day as Soldiers Field
﻿On this evening in 1643, it was filled with soldiers, horses, ammunition carts etc. as Waller prepared to meet the Royalist forces bound from Bradford-on-Avon. Beyond the trees in the distance the ground drops away into the Limpley Stoke Valley and opposite on the other side of the valley in Monkton Farleigh where Waller laid an ambush for the advancing Royalists.
Tomorrow with luck I'll post some pics. of Ham Meadow where there are still visible traces of the earthworks erected by the Parliamentarians to defend the river crossing in the valley .
Posted by Springinsfeld at 13:42 No comments:

With the approach of the anniversary of the Battle of Lansdown (July 5th) I thought it would be good to take a look at some handy references and with luck visit some of the key sites in the campaign. So for starters here are some of the books I find particularly useful when reading about the campaign.

First is The Battles of Lansdown and Roundway 1643 by Robert Morris (ISBN1858040132) and published by Stuart Press. This is a great little book providing a detailed account of the campaign and wonderfully a list of all the regiments and where known the officers therein. Absolutely invaluable and part of a large series detailing many ECW engagements.

﻿Next are a couple of books by Bath's tame seventeenth century historian Dr. John Wroughton. We are particularly lucky in this area to have such an ECW enthusiast in residence, and even more so in that Dr. Wroughton is a staunch Parliament supporter (huzzah!). If I remember correctly he had a bust of Cromwell in his office as deputy head of my old school (luckily I was never called into the office when he became Headmaster but I expect it was still there).
A Community at War (ISBN095202490X) is a detailed study of Bath and North Somerset during the Civil Wars and contains a good chapter on Lansdown. This is is widely expanded in The Battle of Lansdown 1643 an explorers guide (ISBN9780952024989), which goes over much of the same ground but contains a useful section of the battlefield today. The latter book is not without faults eg. musket rests being referred to as 'lintocks' (sic), and has the air of being banged out in a bit of a hurry, but nevertheless worth getting hold of. Interestingly whereas Dr. Wroughton has previously always been quite emphatic about Lansdown being a Parliamentarian victory in this later book he is not quite so clear cut about it.
Hopefully tomorrow I can post a  picture of the field where Waller's army camped

before the ambush and skirmish at Monkton Farleigh and Claverton (if I get out of work in time to get up there with the camera!).
Posted by Springinsfeld at 13:08 1 comment: