Just this minute finished the cornet for these chaps, so the paint is still wet. The cornet depicts 2 hands emerging from a cloud, one holding a sword, the other a trowel. The motto (in utrumque paratus) means "prepared with either". It's one of the cornets of Captain Philip Twistleton, the other I used on the mounted bods I finished a while ago.

The model of Stokesay  castle in the background is a bit battered and dusty. I made it about 10 years ago, and unfortunately it is for 28mm figures, so I will need to do some 54mm buildings soon (maybe a sort of compressed Rockingham castle).﻿
There are some strange lines appearing on the second picture. I am not sure how they got there but apologies for them!
Posted by Springinsfeld at 03:49 1 comment:

Took Things 1 and 2 to see a re-enactment battle today which was being staged at Chippenham by The English Civil War Society. I was keen to see my old unit in action again (Fairfax Battalia), but was rather saddened to see how their numbers had dwindled since the glory days of the late 80's and early 90's.  However the battle they put on was pretty good and both youngsters enjoyed it.
The Royalist Army (boooo!)


﻿
The Godly Parliament﻿arians (huzzah!)
The armies locked in mortal combat.
Altogether a fun afternoon out﻿, despite it being blisteringly hot. It did make me glad to think that instead of doing my ECW battles clad in layers of wool miles from home, I can just pop up to the Growlery in the attic. Mind you I still have all my kit tucked away....
Posted by Springinsfeld at 13:04 2 comments:

One can never have enough facial hair in my book, so when I picked up these A Call to Arms pikemen and saw their beardless chins, I just had to add some curly moustaches and goatees, using Vallejo plastic putty. The drummer and ensign (lurking in the background) are secondhand buys and are New Hope (I think).

These chaps will form another Royalist unit (hence extra milliput plumes as well), but I am making headway with the dismounted Parliament cavalry. I have been sidetracked by my 28mm ECW project, deciding how to paint them. Whether I just block the colours like my 54mm figures (quick and fun) or shade properly (expected result in the wargaming world but rather laborious) or just spend time on the face and block the rest. Hmmmm....
Posted by Springinsfeld at 13:00 No comments:

A couple of little parcels came today, one from Paul Wood at Ensign Miniatures http://www.ensignhistoricalminiatures.co.uk/miniatures.html
These are more traditional toy soldiers but will fit in very well with the existing figures I have. Paul doesn't have the full ECW range available any more but still can make some of the command figures and a very nice little mortar set.

The officer with the telescope will fit in very well with an artillery piece or as a siege engineer.

The other package contained a star find on e-bay from the German manufacturer Peipp Miniaturen.
He will make a superb General.

Normally this figure retails at a massive 32 euros, so I was delighted to grab him at a fraction of that. Peipp have a very large 54mm Thirty Years War range (as well as excellent eighteenth century figures) including some superb officer figures and personalities, but they are very expensive and also not quite to scale with most other 54mm manufacturers. However this is not so important with the officers, and the point of this project is to get painted figures onto the table without being to fussy about details such as scale etc.
Posted by Springinsfeld at 13:32 No comments:

Got round to painting this fellow last night, as I thought it was about time I started doing a few more Parliamentarians. He is Colonel Hannibal Lankin, the figure is by Replicants and is quite a bit taller than some of the other 54mm figures in my collection.

Posted by Springinsfeld at 12:59 No comments:

Firstly, welcome to Kev, of Kev's Wargames cabin http://www.kevswargamescabin.blogspot.com/ my first Follower! Over on Kev's blog are all sorts of goodies including some superb painting, and a budding 54mm ECW project, just like this one.

I managed to play the Father's Day card and bu**er off to the Growlery for half an hour to take some pictures and post them up. I finished these bods last night (or early this morning to be precise).
﻿
That road is really getting busy with troops charging up and down it. Next month's project will to be make terrain.﻿
These chaps are Sir Melchior Karswell's Troop of horse. The cornet is based on that of Tott's cavalry in the Swedish army of The Thirty Years War, and the motto reads 'et in Inferno ego' Sir Melchior being a man with a diabolical reputation.
﻿As mentioned before the riders are from Irregular and the horses by A Call to Arms. I wasn't go to do any shading on my 54mm ECW figures, but the armour just didn't look right so I gave it a wash of Games Workshops Badab Black.
Posted by Springinsfeld at 08:24 No comments:

A bit of a hectic week so far, so not much time for painting. Managed a couple of personality figures though which were quite fun to paint. The swaggering rakehell is a figure by Soldats de Ligne (now available from Barbican Antiques in Plymouth) and Bessy Bunting, barmaid of the Cockwell Inn is a plastic figure from Replicants available through Steve Weston http://www.plasticsoldiers.co.uk/ 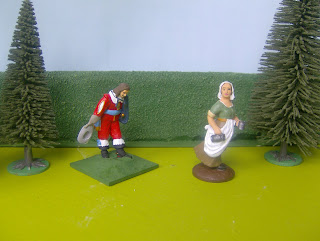 Posted by Springinsfeld at 13:21 No comments:

Not much time in the Growlery today, as it was Thing 2's fifth birthday today, but having packed him and his brothers off to bed I thought I would post a few pics of my ECW inspirational reading and viewing. Having spent many happy years of my youth re-enacting the English Civil War it always amuses me now to hear the same old squabbles among re-enactors about the authentic sort of button they should have on their doublets and soldiers coats or what sort of hat musketeers should be wearing. The arguments now are the same as they were 20-25 years ago when I was an active musketeer (fighting for Parliament naturally).
So it is quite refreshing to get back to basics with this project and distinguish Roundheads from Cavaliers by the amount of feathers and lace they have, and if they have hats or helmets.  The ECW re-enactors bible in the mid 80's was this book 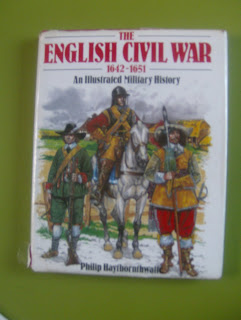 which given it's age is still surprisingly good. Most of the ECW figures manufactured by A Call t﻿o Arms seem to be based on plates from this book.
Another ECW icon to come out of the 1980's was the television series By the Sword Divided 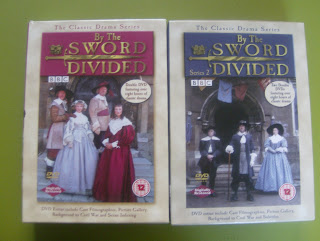 This really did ham up the ﻿Romantic Royalists and Rotten Roundheads, but again given it's age the costumes were surprisingly good and the climatic siege of Arnescote Castle is excellent. The second series is shot in a much darker manner, no doubt to emphasise the gloom cast over the nation by the killjoy Puritans.
The next book was recently mentioned in Old Tidder's blog, For ye Kinge, but as it is so good I will give it another plug. 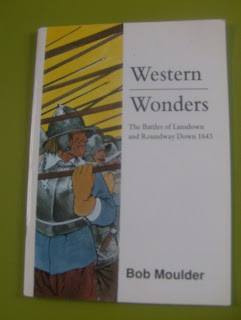 ﻿This features my local and favourite campaign in the ECW, The Battle of Lansdown and is rammed full of ideas and great illustrations (it takes the form of a cartoon strip).
Finally a teen novel which I re-read now and again which has a great plot and at the start an amusing description of a Sealed Knot battle. It's full of inaccuracies but captures the flavour of Seventeenth century England and has a wistful dreamlike quality about it. 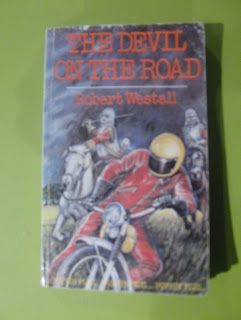 Posted by Springinsfeld at 13:56 No comments:

Quite a good day today on the toy soldier front. In between various household jobs I managed to find time to get ready for painting a unit of dismounted Parliamentarian cavalry, including a bit of conversion work. Also my Peco backdrops arrived from Gaugemaster so I will need to stick those to some mdf soon. Finally I was pleased to win an auction on ebay for some more 54mm ECW figures including a dismounted cuirassier and a siege engineer. Huzzah!! 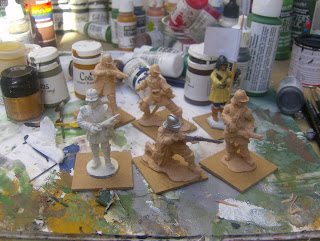 The plastic figs are from Replicants and the 2 metal chaps are secondhand acquisitions. As usual my painting table is a complete tip.
Posted by Springinsfeld at 10:03 No comments:

FOR GOD AND THE KING

Just finished the first Royalist regiment for my 54mm ECW project, so here are a couple of shots with a wobbly sky backdrop. I am finding the speed at which I can bang these figures out quite exhilarating (perhaps I ought to get out more), but as I do most of my painting in the wee small hours with my eyes propped open with matchsticks waiting for the 1 year old (Thing 3) to wake up, a basic job is all I can manage at the moment. 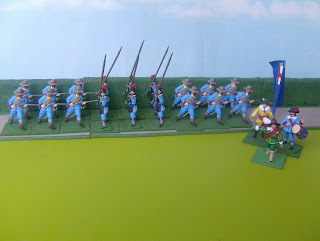 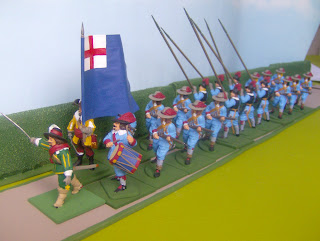 The drummer and rank and file are A Call to Arms, with a bit of converting and head swapping (I also added milliput plumes to the musketeers hats) and the Officer and ensign are from the old New Line range I think, which I picked up secondhand on eBay.
I hope to concentrate on making some more terrain in the next month or so, so my figures can fight on a battlefield rather than marching up and down the road.
Posted by Springinsfeld at 13:58 No comments:

Quick post before dashing off to work (on a Sunday :-( ). I am starting to get a unit of cuirassiers ready for painting. These chaps are probably my favourite troop  type in history. They just look so menacing. The riders are by I rregular, and Ian Kay there kindly sold me them without the metal horses, whch made them much more affordable. I am mounting them on A Call to Arms horses which shoulf just be strong enough to bear the metal rider. 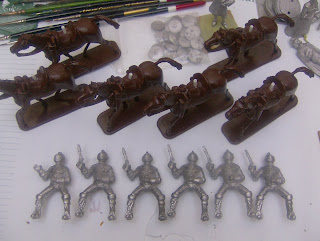 Posted by Springinsfeld at 00:39 No comments:

Galloping into view are by first unit of 54mm figures. They are by A Call to Arms who do 2 quite nice cavalry sets although some of the poses are a little odd. These fellows were shooting each other in the side of the head, but a little judicious bending of arms in hot water sorted them out. As my ECW project is 'old school'  the Roundheads are called Roundheads and are distinguishable by their helmets and disapproving expressions. 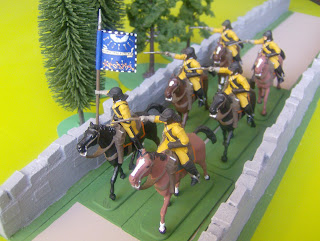 The cornet is suitably Puritanical to being based on Colonel Philip Twistleton's. The motto reads "Thus god will scatter the wicked". Depicted are plenty of sinners being transfixed by arrows raining down from clouds bearing the word 'Iehovah'. 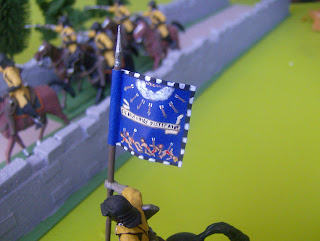 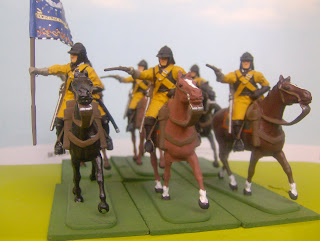 Posted by Springinsfeld at 13:20 No comments: