Just finished this figure which was very quick to paint being chiefly black and gold. A very old Ral Partha miniature which I am using as Conan one he has become king of Aquilonia. I like the leg armour on the horse. 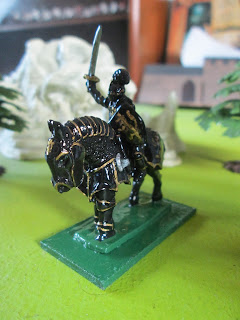 '...Conan's armor of black platemail, with the vizored salade and the dark plumes nodding over a wivern crest. Over all they put the silken surcoat with the royal lion worked in gold upon the breast and they girt him with a broad gold buckled belt which supported a jewel hilted broadsword in a cloth of gold scabbard.' (Conan the Conqueror).

The Black Dragon cavalry are on the varnishing block as I write.

Having set my oldest son Robin on the road to penury and madness by getting him into playing with little soldiers, I have now started the initiation of my next 2 sons Arthur and George. Arthur has been keenly painting 1/72 plastics from a variety of manufacturers and set up his first little battle the other day 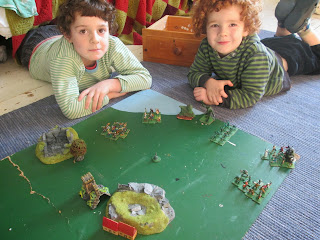 The board has seen better days, so I had better knock him up another soon. Note the home made troll, now painted centre right.

Posted by Springinsfeld at 13:11 3 comments:

A busy week all in all. Saturday I went up to Warfare in Reading which is usually a good show, and this year was no exception. I picked up a few old Ral Partha figures at the bring and buy along with other items to re-sell.  I tootled along to the Lancashire Games stand and introduced myself to Mosstrooper who was manning the stall with his friends. Very nice to meet a fellow blogger in the flesh (strange too after following his blogs and seeing pictures of him, bit like meeting a favourite film star).

Painting is going apace, the slap it on with little or no shading produces results

Some of the Aquilonian Royal Guard, the Black Dragons 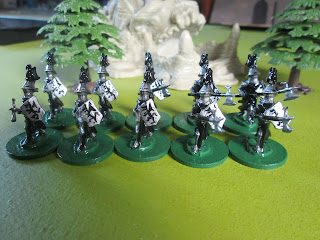 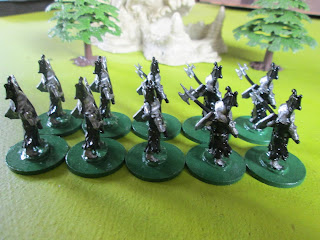 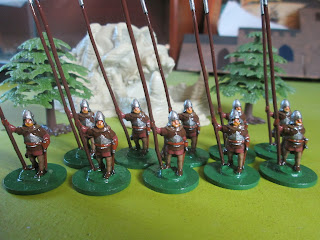 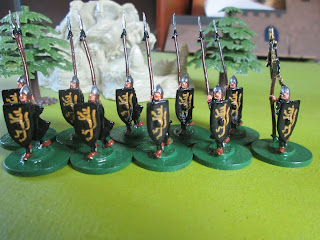 There is something profoundly satisfying about handling gloss varnished figures.

Posted by Springinsfeld at 10:49 2 comments:

I managed to get these finished today, and I hope to have a varnishing session tonight, but here they are in their matt state. 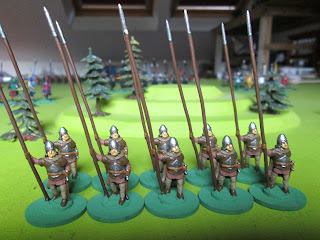 As far as I remember they are described in the Conan novels as being clad in sober homespun clothing and steel helms and corslets. The rule book Royal Armies of the Hyborean Age also mentions they are fair haired so I have given them blond beards. Figures by Garrison.

Email ThisBlogThis!Share to TwitterShare to FacebookShare to Pinterest
Labels: Royal Armies of the Hyborean Age

As always I think about my Grandfather today.  Sgt. Chas. Darwin Longfield Machine Gun Corps. He died when I was only a few months old, but luckily I have his medals and citation for his MSM.  Also My great Uncle Mick Comerford, Private Royal Berkshires, wounded at the Somme and Passchendaele.
Posted by Springinsfeld at 05:50 No comments:

2 posts in 12 hours? What's going on? Taking advantage of a weekend off work, and a visit from the inlaws yesterday (I slunk away to the attic for an hour), I managed to finish these nice old Garrison figures. Not varnished yet, but if I wait until I do that it will be another 2 weeks. 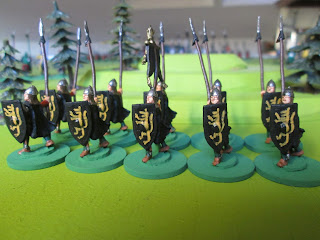 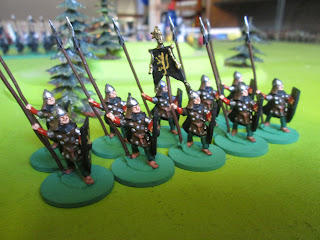 I really must get a backdrop in place for photos...so much to do so little time.

Posted by Springinsfeld at 00:42 3 comments:

Email ThisBlogThis!Share to TwitterShare to FacebookShare to Pinterest
Labels: Royal Armies of the Hyborean Age

I have been getting some painting done recently, but have been distracted by the arrival of these 2 little fellows 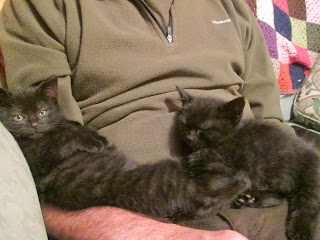 Nibbins on the left, Mavis on the right. We couldn't decide on a name for one cat ("I'm not having a cat called Nibbins, it sounds too stuffy and  Victorian " "Mavis is a daft name for a cat. it reminds me of my old aunt"). Happily there were 2 black cats in the litter so we had both. The name Nibbins comes from The Midnight Folk by John Masefield (the prequel to the better known Box of Delights ). He is a reformed Witches cat who helps Kay Harker locate the treasure and thwart the evil Abner Brown and Sylvia Daisy Pouncer (just occured to me that they would have made good cat names). They were born on Friday 13th September and came to live with us at Halloween. 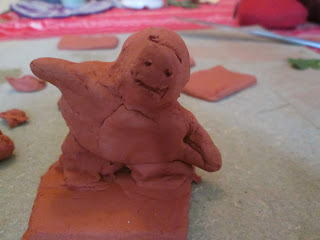 Arthur has been having a go at sculpting his own figures. Here's a rather jolly troll.

Posted by Springinsfeld at 12:55 8 comments: