A bit of a flying post, everything I do seems to be in a rush recently, and I haven't had much time for blogging with one thing and another. I've been meaning to post these up for a while now, and today, the centenary of The First Day of the Somme seems like a good time.

I don't remember my Grandad (my Mum's father). I was only about 6 months old when he died in 1969,  but at least he met me. His breathing problems carried him off in the end, partially exasperated by his heavy smoking, mainly because the one lung he had left after being gassed was in tatters. About 20 years ago I tried to gather some information about his activities in the Great War. He joined the army in 1915, aged 17, and as far as I can make out he was in the Rifle Brigade at this point and then transferred to 4th Reserve Infantry Brigade
During this time , presumably still in England he won a ten mile race in full marching kit for which he received this little award 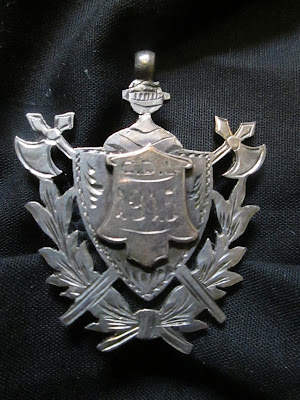 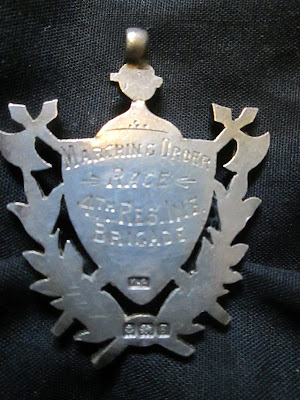 his initials stand for Charles Darwin Longfield, presumably HIS parents were Darwinists and the name has been preserved in our family, although none of my own kid's have it (which was remiss of me). He also received a silver topped swagger stick for winning this race, but that is in my Mum's umbrella stand at the moment and I couldn't photograph it tonight.

Here are his War medals, including the MSM he won in 1917, having moved to 244 coy Machine Gun Corps and been made a Sergeant by this time. They are in mint condition as he never wore them. My Mum tells me he made light of his experiences, and used to scare her with stories about the rats in the trenches, but didn't think much of the medals as a token of what he and his mates went through. 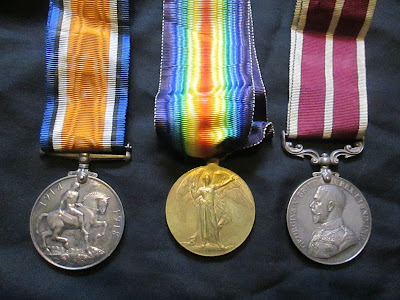 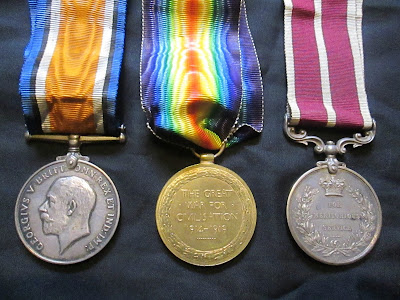 The MSM was either awarded for gallantry of useful service. If the former then the citation recorded the deed, but if useful service the deed was not recorded, and it seems the latter was the case for my Grandad. There are several family stories of how he won it, one being he shot down a German spotter plane with either his pistol (I believe machine gunners carried small arms) or the machine gun, or he took out a series of enemy gun nests with his MG team.

Here is the citation as it appeared in the London Gazette in 1917, he's 4 up from the bottom 6285 Sjt CD Longfield 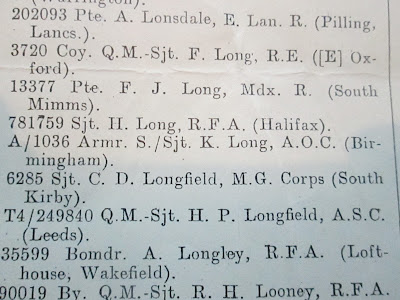 He certainly fought on the First Day of the Somme, possibly with the KOYLI according to family stories, but I'm not sure . 244 Coy MGC seems to have been active later in the War according to this document I gleaned from some record office years ago 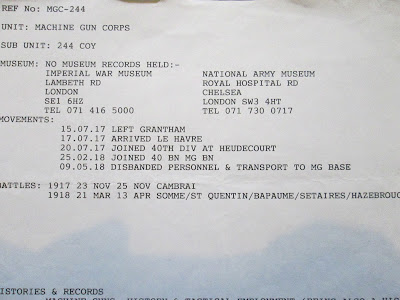 At some stage in 1917, possibly at Cambrai, he was badly gassed and left for dead. He was recovered some days later, but had been been blinded by the gas as well and remained blind for 6 months having been sent back to Blighty.  The colliery he worked for (Allerton Bywater near Leeds) sent wounded veterans to convalescence in Scotland, where they recovered by cutting pit props and generally breathing in clean air.  The colliery also awarded him this certificate 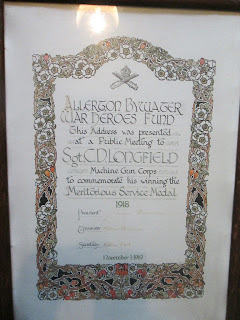 and rather nice watch 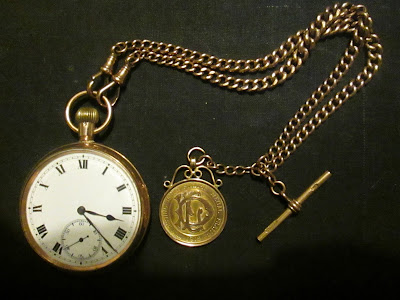 Inside is an inscription of the award mentioned on the certificate. 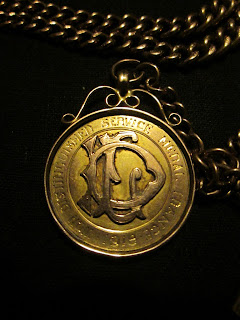 His initials as a cypher on the fob.

Happily, he made it through the war, and into the next one, this time as a Captain in the Morecambe Home guard. Here he is leading his men in what I think is a classic picture, which has pride of place in my gaming room. 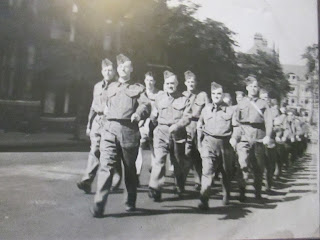 That's Captain Longfield at the fore, and the chap directly behind him is the spitting image of Sgt Wilson!

He was also an active Freemason, and I have some of his Jewels (as Bob Cordery kindly informed me of the proper name for this type of regalia).I hope you find these interesting Bob. 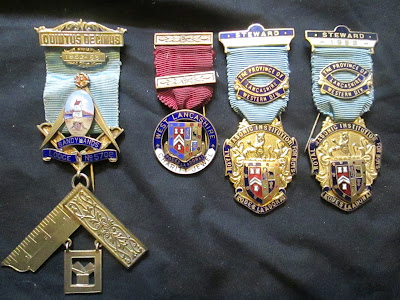 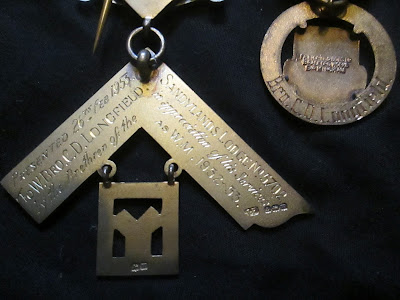 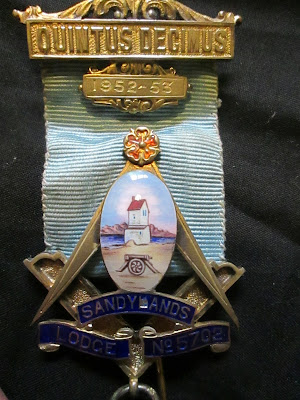 I would be interested to find out the meaning of the little house and 'cannon'.

Now let's take a look at our family's other war hero (they are all hero's in my view, to make it through such a bloody awful affair).

Private Mick Comerford was my Dad's uncle. He later became a gamekeeper at a little village called Berkley near Frome in Somerset,not far from where I live, but my Dad was brought up in Lancashire and used to come down to Somerset in the 30's as a small boy to stay on the estate Uncle Mick worked on.

Uncle Mick joined up in 1915, and we also have his medals. He has the 1914-15 star, which I think was awarded to soldiers who fought in 1915. The 1914 star was for those who joined in 1914. However he was given the Christmas tin of cigarettes and chocolate which initially was for soldiers at the front at Christmas 1914. Just reading up on the tin now, more seem to have been issued later on using surplus fund money, so he could have been a later recipient. 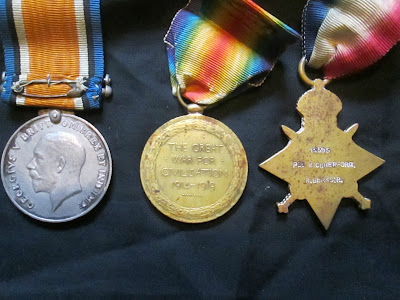 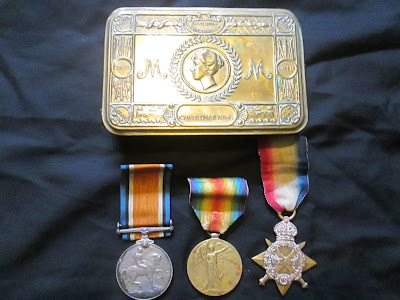 Uncle Mick often wore his medals, ands as you can see they are a bit more battered than my Grandad's.

He fought with the Royal Berkshire Regiment, and it seems from the battle list below, they had a pretty rough time of it 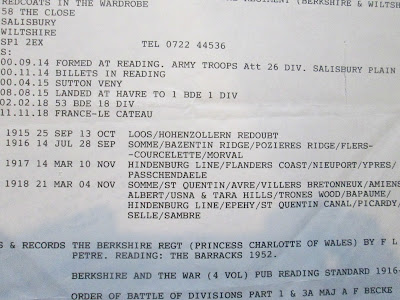 Again, happily, he made it through, unscathed as far as I know and his discharge is recorded here 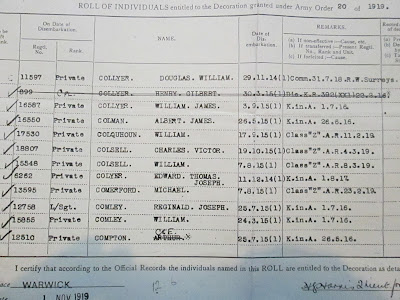 My Mum (87) was feeling a bit glum today, after watching and listening to memorial services, but if her Dad hadn't made it through the War, she wouldn't have been around nor my brothers, myself or our children, so we have a lot to rejoice about, while remembering those who didn't make it back.

Hopefully normal service will resume soon, and I can show you some toy soldiers!

Posted by Springinsfeld at 15:28 4 comments: