I managed to get this lot finished recently. They have been undercoated for over a year sitting patiently on the table whilst other figures jumped the queue. They are the warband of Condidan , King of Glevum (Gloucester) around 577AD for my battle of Dyrham project. Figures are Hat, Miniart and Newline. 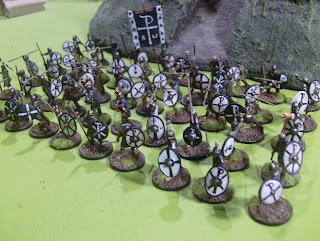 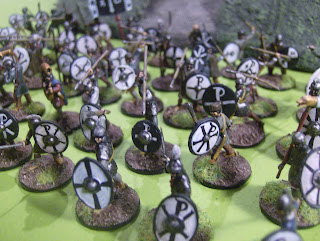 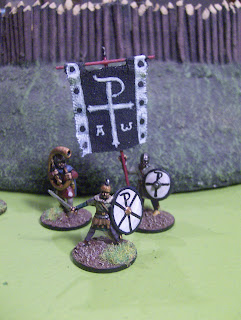 Condidan
﻿I have been enjoying reading the Conan stories recently and spent an evening sorting through some 1/72 figures to find suitable Hyborian types, with some success, although I have been tempted to by some 32mm figures as well from Bronze Age Miniatures or Reaper. It is a long time since I purchased fantasy figures and I was surprised by the cost, but for roleplaying or skirmishing I should only need a few, and I can see Conan appearing in 2 different scales.
Half term has been quite busy, and I have taken a couple of days off work to do family stuff, not least Mrs. Atticus and myself actually got round to getting married yesterday, after 13 years and 3 sproglings!!
Posted by Springinsfeld at 14:00 4 comments:

No prizes for guessing who this chap might be. The horses and warlord are Italeri and the Standard bearer Hat. 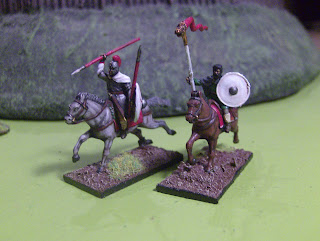 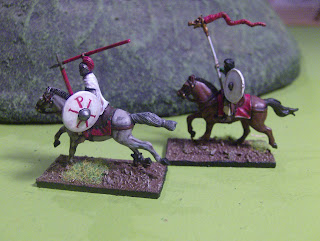 sorry the pictures seem a bit grainy, I took them using the desk light rather than daylight. One of the great things about 1/72 plastics is that they are so cheap! In 28mm these guys would be £3 each at least but these fellow work out at about 55p a figure.﻿
Posted by Springinsfeld at 11:25 3 comments:

Here is the latest instalment of a project I have had ongoing for about 4 years now. Painting the armies to refight the Battle of Dyrham which might (or might not) have been fought in 577AD not far from here. Current thinking seems to indicate that the account in The Anglo-Saxon Chronicles is so much hogwash and is later West Saxon propaganda, but whatever the case it is an interesting subject.

I have finished most of the Saxons which I have based on large bases (8 figures on each) but have since realised that I would prefer to have them as individuals so will need to redo them all (300!)

Here is the first batch of British warriors completed, the warband of Gereint map Farinmail, Farinmail being the name given of the 'king' of the city of Bath (then called Aquae Mann by the Christianised population, rather than the more well known Aquae Sulis, which presumably might have been too pagan) 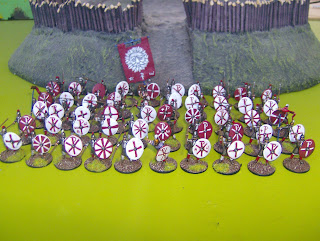 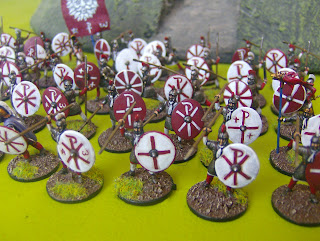 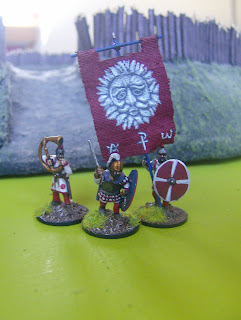 Farinmail
I think real warriors from this time might have looked a bit less Roman, and the warbands of the other 2 kings will be a bit less uniform, but as Farinmail is my favourite character and from my home city, I have given his warriors the best kit. ﻿The standard is based on the Gorgon carving found at the Roman baths here, and seems quite Celtic in appearance, so I chose to use it as a depiction of God to spur the soldiers on against the heathen Saxon (much good it did them).
Figures mainly HAT with the odd Italeri. Farinmail and his standard bearer are Newline.
Posted by Springinsfeld at 12:40 5 comments:

I have been looking for this book for a while and was very pleased to see it come up on Amazon marketplace from a seller in the States. The original sells for thousands but this is a very nice reprint done in 1969
.
The Theorike and Practike of Moderne Warres by Robert Barret was the manual of the day and illustrates how to run your army and fight successful battles in 1598. I have a box of 28mm Elizabethans mouldering in the attic, so this could provide inspiration for yet another project 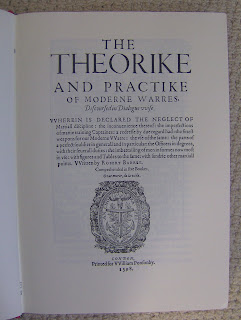 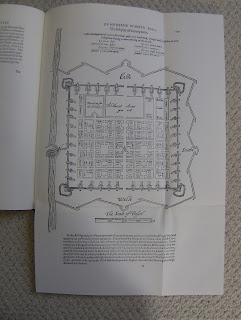 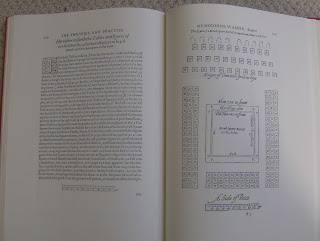 Posted by Springinsfeld at 05:19 No comments:

Email ThisBlogThis!Share to TwitterShare to FacebookShare to Pinterest
Labels: Tudor and Jacobean Capers

I have been distracted recently from painting and blogging by Gillian Anderson. Sadly in DVD format as I got hold of the first 2 series of The X-Files which I used to enjoy in those heady days of bachelorhood, weaving back from the pub in time to see them on BBC2.

However I have completed more Imperial Cavalry, this time Maestro regiment which were heavily engaged at Wimpfen 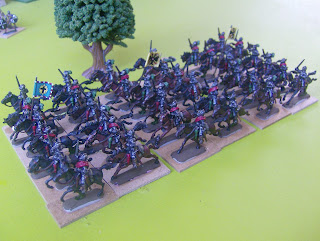 I have also been looking at buying some Romano-British re-enactment kit to kick off a new period after a couple of years off dressing up and playing at soldiers.
Posted by Springinsfeld at 12:19 2 comments:

I picked this book up a few weeks ago when driving the Oxfordshire village of Charlbury. I called in at the tiny but excellent Evenlode Bookshop, which had an eclectic mix of fascinating literature  http://www.evenlodebooks.co.uk/

This is about the life and times of a renegade Royalist James Hind, who was quite the popular hero in his day, running rings round the officers of Parliament and robbing them with impunity. A fascinating read with plenty of potential for ECW scenarios. 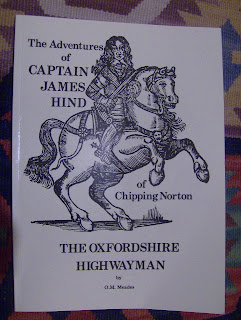 also Welcome aboard Ray. Thanks for following.
﻿
﻿
Posted by Springinsfeld at 14:54 5 comments: