ROUNDING THE YEAR OFF AND TAKING STOCK

As the year draws to a close, I darted into the attic tonight to lay out the years painting and was pleasantly surprised by the amount I had completed. The latest and probably most useful project was the completion of a backdrop for my gaming table as I have been casting covetous eyes at other folks railway backdrops. I decided to have a bash at doing my own, constructing free standing boards  of 3mm mdf  to go round 3 sides of my 6'x 4' table. The scene is primarily for Imagi-nation use but looks suitably English to double as an ECW backdrop too (it is in fact based on the skyline of Stourhead Gardens , Wiltshire). On the reverse I plan to paint a more rugged fantasy scene for my Oldhammer and Conan figures. 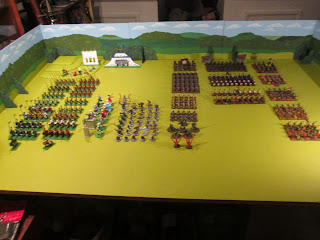 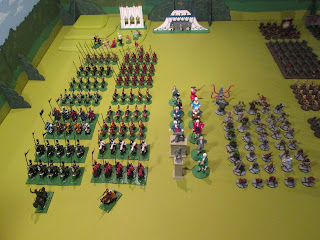 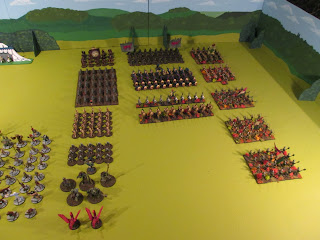 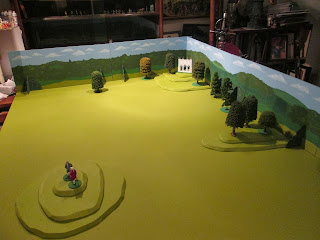 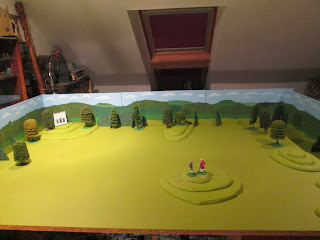 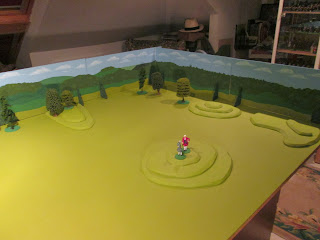 Posted by Springinsfeld at 14:08 8 comments:

Good Morrow and a Very Merry Christmas to you.

Perhaps any gentle readers could help me out. I am setting up a new blog here
http://marsinarcadia.blogspot.co.uk/
with a view to expanding my 18c Imagination interests if time allows. I can't seem to set up a followers Gadget. It still exists on my other 2 blogs, but I am unable to install it on the new one without joining Google+ . I don't really want to do this as I like to remain relatively anonymous and also keep my current profiles on my other blogs (which are replaced upon joining G+).

I wish they would stuff buggering about with things as I am slow at learning technical stuff as it is. Anyone any ideas please? 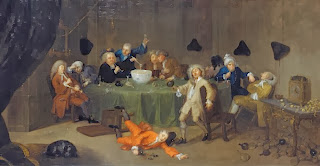 CHRISTMAS FESTIVITIES AT THE MARGRAVE OF TROMPENBURG'S PALACE

Posted by Springinsfeld at 12:48 9 comments:

It doesn't seem long since I was posting this time last year and hear we are again. It has been a lean year on the blogging front for me, hampered by my technophobia and ennui, but I have managed to get a decent amount of painting done.

May I wish all readers and blogging friends a Very Merry Christmas/Yule.

Here we see a Christmas concert in the parkland of Trompenburg. The Margrave has been excited by news of a Turkish pavilion erected by Mr. Hamilton of Painshill in England and has decided to follow the new Rococo trend of Turquerie and install a similar edifice in his own garden, among a stand of Tradgardland firs (abies gruberii)  . A recent fall of snow had the gardeners clearing the area around the tent so the musicians didn't get chilly feet. 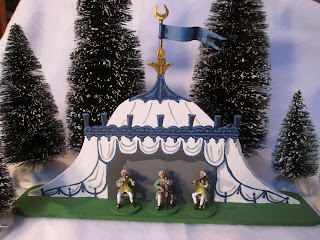 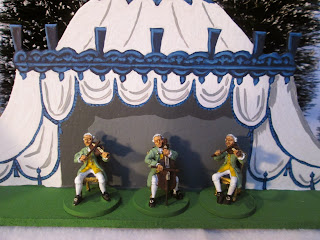