Here is another witch figure I finished just before Christmas complete with attendant familiars. This time the devil's agent is a bit younger and comes complete with broom (figure by Sanderson). The familiars are from Reaper. Ral Partha and Rapier, the latter doing a great range of 28mm witches too. 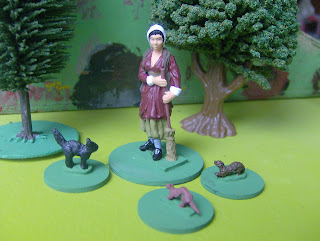 I was lucky enough to get 2 boxes of HAT 1/32 SYW Prussians for Christmas so they are being desprued when I get the chance to make a start on my Imagi-nation army.

Have a Very Happy New Year. I certainly hope that I will be able to be less of the Wargames Butterfly in 2012 but I have a feeling that the temptation will be too great to resist dabbling in more different projects.
Posted by Springinsfeld at 13:04 3 comments:

At last our offering to the Germanic tree spirits is in place, although George (Thing 3) was scared as I brought it in through the door tonight. However, he cheered up as he and his brothers gathered round to decorate the Christmas tree. I only put on one decoration, which was my grandmothers and then retreat growling behind the newspaper 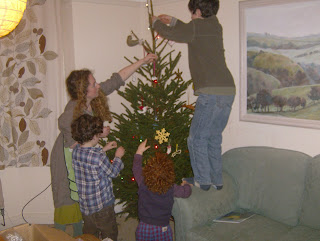 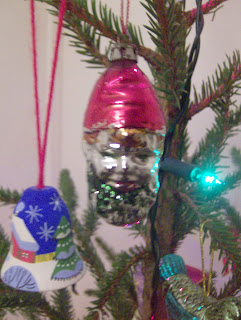 In time honoured tradition the bulbs have blown twice and the tree is plunged into darkness, so next year we are going get some German candlesticks to hang on the tree from our Tuetonic chum Simone, who runs a Christmas stall at the Bath market.
I also got this through the post from Steve Weston Soldiers. Steve has been looking out for it for a while so I was pleased when he let me know it was in stock 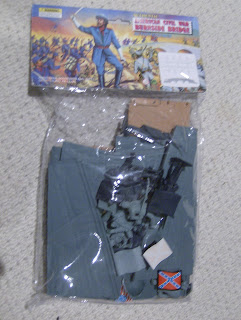 ﻿Although really Burnside Bridge from the Battle of Antietam, it will make a good terrain piece for my ECW project.
A Merry Christmas to you all.
Posted by Springinsfeld at 12:55 3 comments:

THE BOX OF DELIGHTS

An institution that has been in our family long before we had children (in those peaceful days of just Mrs. Atticus and me) was to listen to the BBC radio adaptation of The Box of Delights by John Masefield each year in the run up to Christmas.

This year we decided to buy the BBC television series first screened in 1984, for Thing 1 (9) to watch as we have been reading the book to him recently (for our own benefit rather than his, it has to be said, but he is enjoying it immensely, and there is great scope for putting on outrageous accents). As we don't have a gogglebox, it was quite treat for him to stay up and watch the first 2 episodes on the laptop.

Despite being 27 years , it really is superb and quite faithful to the book, evoking Christmassy nostalgia not only from our own youths but from that mythically wholesome era of the 1930s (it was published in 1935).  I'm not sure why the 30's always seems such a safe place to be, perhaps final days of innocence before the bloodiest war in history, perhaps because my own parents childhoods were during the 20's and 30's? Certainly people dressed more snappily...
Posted by Springinsfeld at 14:07 2 comments:

A bit of a flight of fancy from my ECW project, but here is a depiction of Count Magnus de la Gardie and his unholy companion with a victim, based on the events told in Count Magnus by M R James. The Count is a Sanderson figure, painted to look Scandinavian and villainous, the 'companion' is a Cthulhu figure from Frothers Unite and the unfortunate faceless Roundhead a converted Replicants casualty figure, with a skull taken from a skeleton figure in my oldest son's soldier box (I knew they would come in useful when I bought them for him). 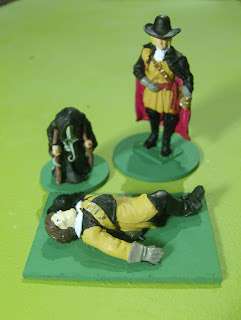 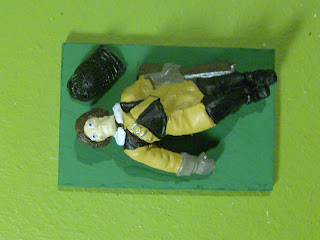 To get some ideas for witchy types and witch hunters, I watched the film version of Robert Howard's Solomon Kane last night. I have always liked the Solomon Kane stories and was keen to see them translated to the silver screen.....

Although the stories are clear pulp with only the vaguest nod to historical accuracy (despite Howard being a knowledgeable historian) I was at least expecting some attempt at realism, which perhaps was asking too much. Within the first 2 seconds of the film (set in 1600-1601) a ship sails past flying the Union Jack and things went downhill from then on. The puritan Kane haunted by the knowledge that his soul is damned , then proceeds to stay in a monastery (in post reformation England mark you), and then travels westwards to his ancestral homelands, through wasteland peopled by muddy serfs (shades of Monty Python's Autonomous Collective) and scabby headed post apocalyptic thugs. At one point he lodges in an Italianate church on the borders of Somerset and Devon (presumably Exmoor).

Despite the film being an excuse to show off  special effects in abundance and with a rather strained storyline, there was some great imagery and the odd scene which certainly provided some ideas. The  shot with the 2 bird masked doctors was particularly effective, and I hope to do a conversion to make one of these sinister apothecaries.

So all in all, not a complete waste of time but not the Kane I knew from my teenage years.
Posted by Springinsfeld at 07:46 1 comment:

Here is a figure I got from Green Man and Gatekeeper, a New Age/Wicca shop in the Forest of Dean. Despite being more of an ornament with less defined detail, it painted up pretty well 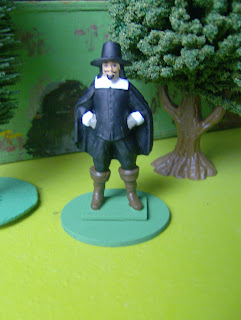 Posted by Springinsfeld at 07:38 5 comments:

I thought I would have a bash at some 54mm figures for a change from the 20mm I have been doing recently, and prompted by my idea of a witch hunting scenario I had a go at these 2 villains from H P Lovecraft's The Dreams in the Witch House, one of his more disturbing stories (and that's saying something) 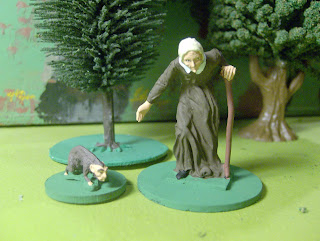 Keziah is a Sanderson figure, and the repulsive Brown Jenkin is from the old 15mm Asgard range (a wererat if I remember correctly).
﻿I hope to paint up a couple of witches from M R James stories to give Matthew Hopkins a run for his money, so soon to follow are Count Magnus and his attendant and Mistress Mothersole.
Posted by Springinsfeld at 15:18 3 comments: 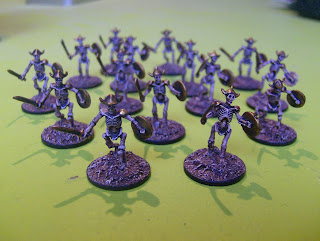 I thought these skeletons from the Caesar box looked suitably Conanesque with their horned helmets. 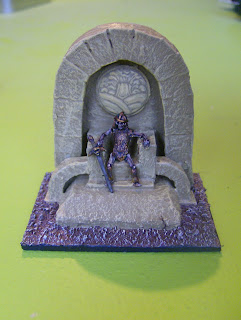 This Undead lord is based on the scene in the film Conan the Barbarian when Arnie finds the Atlantean sword in an underground burial chamber. I built the throne from foamboard and card. The sword is from an ancient Asgard figure I have had  since 1979. 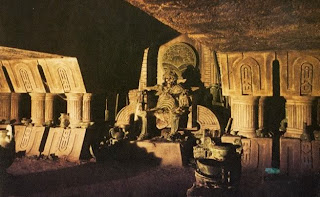 Posted by Springinsfeld at 13:24 2 comments:

I had a pleasant evening last night in that I went to see Nunkie theatre company http://www.nunkie.co.uk/theatre.html at a little theatre in Bath. This chap, Robert Lloyd Parry takes the role of my favourite author M. R. James and gives a performance of 2 of James' ghost stories which he has memorised. Although seated in a chair throughout the performace his acting is quite superb and the audience were quite enthralled with that 'pleasing terror' James was so good at conveying.

Last night we had Lost Hearts and A Warning to the Curious, and if you haven't read the ghost stories of M R James I urge you to rush out and grab a copy now, as they are some of the best stories written.

Posted by Springinsfeld at 13:08 No comments: