THE SWORD OF THE LORD

On a bit of a roll here and have just finished my second Parliamentarian cavalry unit, using A Call to Arms Ironsides 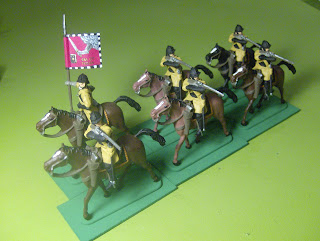 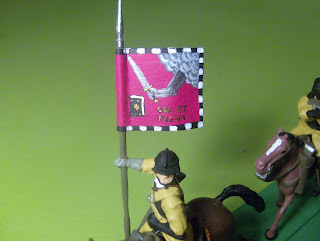 The cornet reads "Ora et Pugna" (Pray and fight)
﻿Carrying on the ECW project, I have started to convert a Royalist cavalry unit using heads from ACTA infantry, as we all know the Cavaliers had large floppy hats. I will add some outrageous plumes and facial hair, and am toying with the idea of snipping off the carbines and adding a sash... 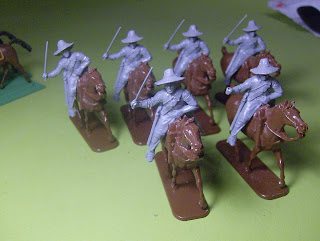 Posted by Springinsfeld at 15:02 3 comments: 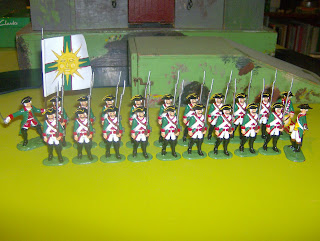 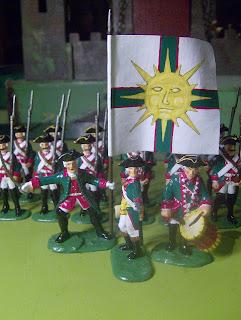 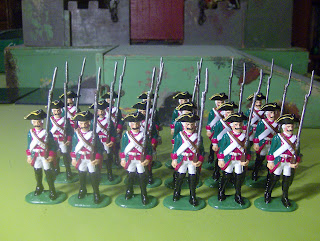 The Regiment musters outside the gates of Schloss Gonchiestein
(made by my late father 40 years ago!)
﻿
﻿
Posted by Springinsfeld at 14:27 6 comments:

Well it's been a hectic month with various everyday issues getting in the way of serious playing on my part. Rummaging around in the Attic eaves for stuff to sell on eBay and then actually listing it is time consuming, then we had Mrs. Atticus celebrating her birthday yesterday and school problems (hopefully sorted) etc.

Anyhow, I am making headway with the first battalion of Trompenburgers, with only the command figures to do (note to self- always paint the command figures first as I least like doing them), but I haven't had any time to plan out my Imagi-nations which of course is what makes them so interesting.

Happily I did some moonlighting gardening last week and the proceeds went towards these figures from Fourty-third Ltd.

who make some lovely (but not inexpensive) figures. 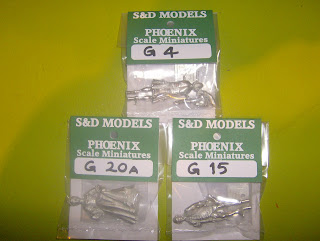 A couple of eighteenth century gentlemen and a lady too. The soldiers are always interesting in these imagi-nations, but for me it's the civilian figures and their settings which are best, and I am continually entertained by Tidders over on his blog Kingdom of Wittenberg, by the intrigues of the court.﻿
Posted by Springinsfeld at 14:34 No comments:

A shameless plug for my ebay sales which I have been concentrating on over the last few days, rather than painting. I'm all fired up about Funny Little Wars at the moment and hope to get some 54mm Traditional soldier moulds soon, but of course need the capital hence.... 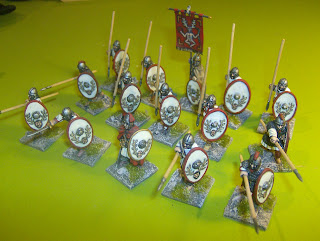 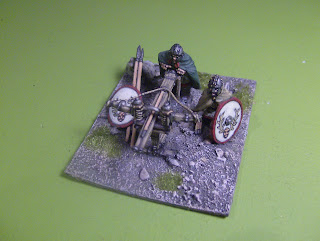 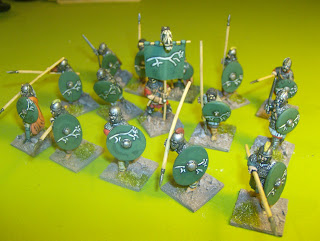 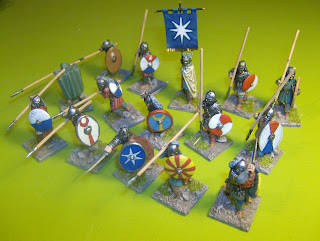 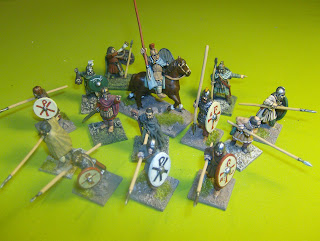 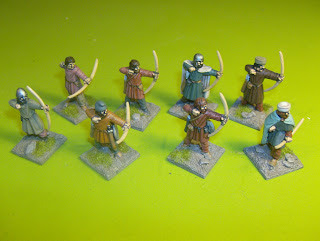 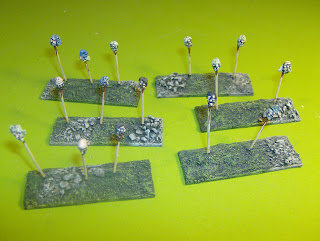 Ghost Fence !!
there are quite a few 15mm figures for sale as well as a vintage fantasy piece, The Great Bell from the Valley of the Four Winds Minifigs range.
Posted by Springinsfeld at 13:41 No comments:

In a desperate bid to raise a bit of cash for future soldier purchasing, I am selling off some duplicated figures and books on ebay, so please roll up and take a look. Old D&D stuff and a few Elric figures too

The Lego set is one of Robin's duplicated Christmas pressies, so any funds from that will be ploughed into his 54mm medievals or gladiators project (if I have anything to do with it).
Posted by Springinsfeld at 15:22 No comments:

Varnished this chap this morning with Klear floor polish from Lakeland. I  really enjoyed painting him in a toy soldier style and will definitely stick to this sort of finish. I want to try and get that even smoother glossier finish that traditional toy soldiers have, but that might mean using yacht varnish...will this yellow with age? 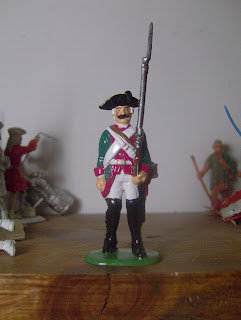 ﻿I was pleased how he came out, and will crack on with the rest of the regiment. A white undercoat made the colours quite bright too.
Posted by Springinsfeld at 11:01 4 comments:

A Happy New Year to you. Happily this morning dawned without a pounding head as we were very sensible and turned in early last night (to be awakened at midnight by barrage of fireworks). After a walk in the woods we went over to a friends house in Monkton Combe, a village just down the road from us and had tea and buns. Matthew there is a keen target archer and I was most interested to see his bow, an edifice of wheels, pulleys and sights, unfortunately I had forgotten the camera, or I would post a pic of it.

I have decided to use a new avatar/image thingy this year, an eighteenth century gentleman called Sanderson Miller who was responsible for designing a number of follies and eyecatchers for wealthy friends (including Sham Castle on Bathampton Down near us). Those of you who know the Battlefield of Edgehill will also know the Castle Inn built where Charles Stuart (that man of blood) raised his standard before the battle, this was built by Miller as a folly on his own estate in the mid eighteenth century.

Hopefully this year I will make a start on my Imagi-nation campaign, War for Arcadia in which the Duke of Trompenburg and the Prince-Bishop of Arnheim battle it out for the best landscape garden. I have made a start on the 54mm Trompenburgers by preparing them for painting 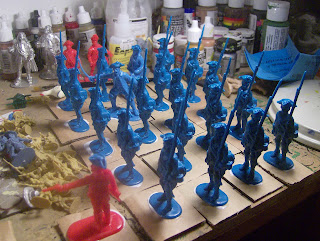 The figures are the new HAT Prussians with Armies in Plastic Command bods. One thing I did notice with all these figures is that even after washing in detergent they would not take the usual coat of PVA I tried to give them, the glue pooling in blobs all over the figure. This was particularly bad on the AIP figures, so I will have to undercoat them in enamel and give them an extra coat of floor varnish after painting.﻿ I plan to do them in a real toy soldier style, with pink cheeks and rosebud lips and extra glossy varnish.
With luck I will also have a go at doing the same campaign in 1/72 using Zvezda GNW figures which I prefer as they are more suitable for 1730's when the Arcadian movement in England really began to take off.
Also on the painting table is a regiment of Roundhead cavalry in progress 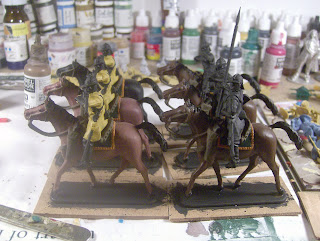 Posted by Springinsfeld at 15:03 6 comments: