A flying post here. We set up the battle of Lansdown for Robin's history project and moved the figures around for different stages of the battle. This was done rather on the fly, as the project is due in on Monday and we are having a tour of the battlefield tomorrow, courtesy of Ian Chard..a splendid fellow and member of the Skirmish Wargames Group, who also happens to be the Battlefields Trust 'warden' for Lansdown. Slightly fuzzy pots as the light wasn't brilliant and Robin, who took them was well excited. I aim to make some more bespoke terrain in the future and spend a bit more time on getting the terrain better. 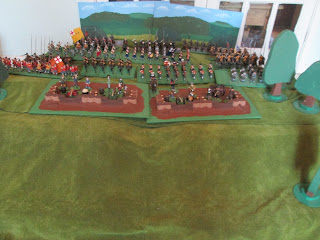 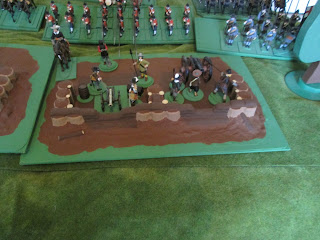 The small hammered guns well entrenched on the brow of the hill. 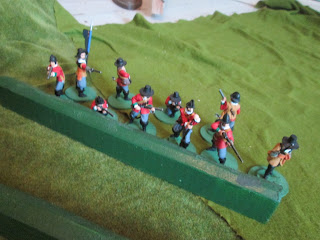 Parliament dragoons sally forth to goad the Royalists off Tog Hill ("...it was aptly named, for wee had much tougging to gain mastery of it") 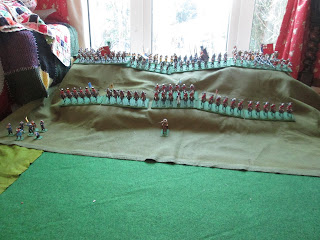 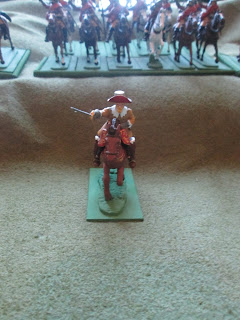 Lord Carnarvon  leads the Royalist cavalry down the hill 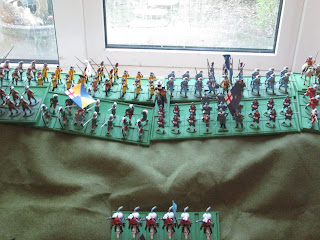 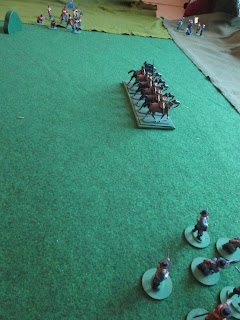 A body of Parliament cavalry support their dragoons 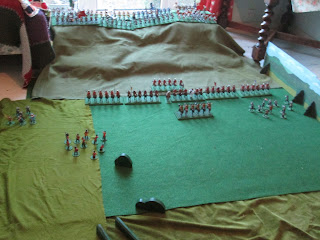 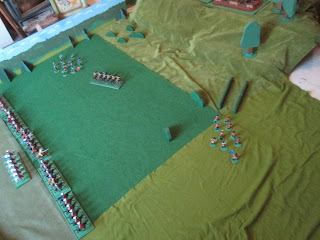 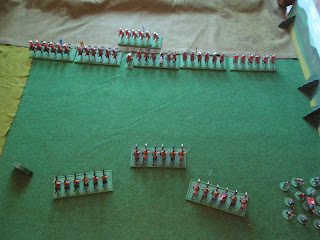 Colonels Burghill and Carr boldy charge the the Royalist army in it's entirety (...it was the boldest thing I ever a saw...to charge an army in it's own ground more than a mile from their own body") 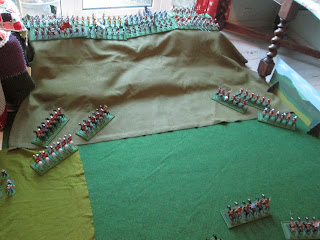 The Royalist cavalry flee...earning themselves the appellation "The Runaway Horse" 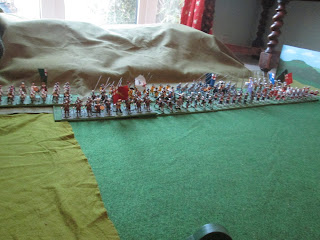 Incensed by their cowardly cavalry, the Royalist foot march down the hill to give battle. 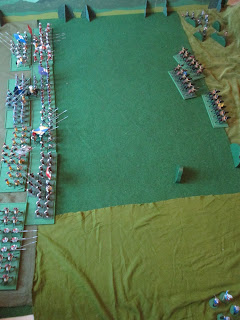 The Parliament horse wisely pull back, to lure the enemy infantry into a bloody trap 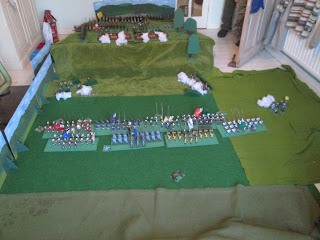 The Royalist foot approach the foot of Lansdown and the Parliament guns play upon them. They are also enfiladed by dragoons and musketeers lurking in behind hedges and walls. (Wish I had moved the catfood there!) 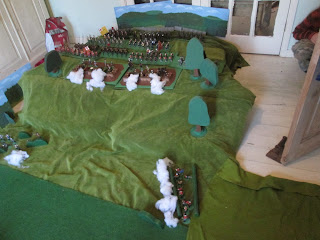 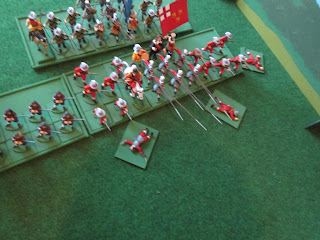 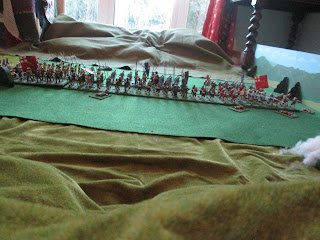 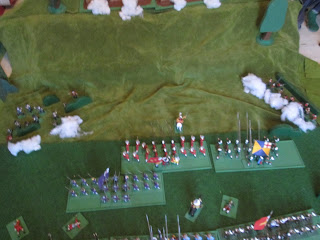 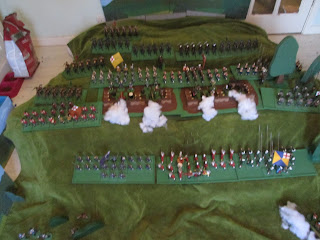 They begin their assault upon the Parliamentarian earthworks...at a terrible cost. Arms and legs fly into the air as they are pounded by the artillery. 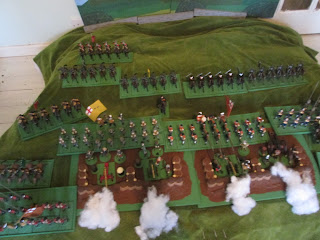 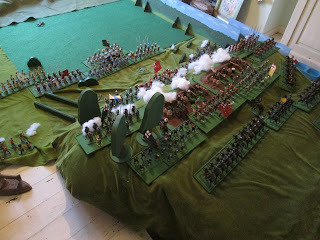 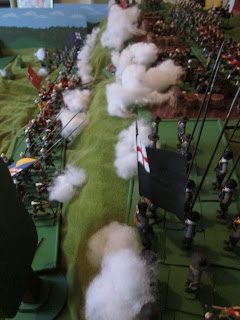 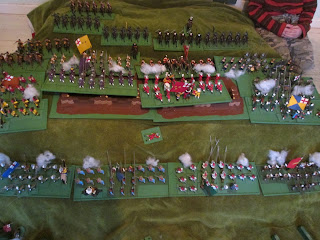 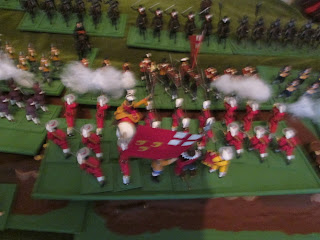 (getting exciting here) as Grenville throws away his life. The Parliamentarians fight back and Sir Arthur Hazelrigge leads a counter charge with his famous Lobsters. (...so called as they are couvered in a bright iron shell") 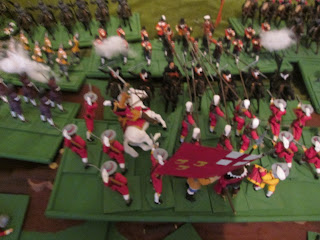 Grenville falls, poleaxed by a cuirassier, and Hazelrigge receives a pike wound to his thigh. 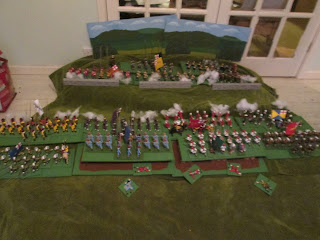 Waller withdraws behind a stone wall to his rear that has been pierced with holes to allow horse through. The Royalists balance precariously on the edge of the hill...a spent force ("...one lusty charge would have rolled us to the bottom.") 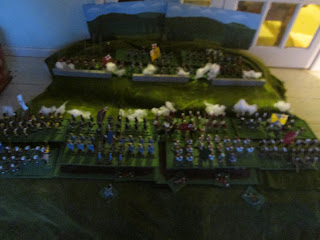 Night falls as the armies fire half heartedly at each other. Waller withdraws to Bath having protected it from Royalist capture. Parliament casualties no more than 80....Royalist casualties between 200 and 500, including Grenville. A definite Parliament victory, yet all the history books say otherwise. I can't get my head around it.

Quotes in italics are along the lines of  real ones, but I am remembering them off the top of my head, so forgive me if they are a bit wrong. I am enthused to do more scenery and baggage train in 54mm, but goodness, they take a lot of room up when laid out. Next time we may borrow the village hall. I hope to do Waterloo one day with a bout 4 times as many figures.

I have also just sold a heap of 10mm Warmaster figures, and within hours Prince August had a sale on their Roman wars moulds so I bought some of those with proceeds, and this very evening Black Tree discounted their Roman range by 50% so I hoovered up some auxillaries and artillery..... I still have cash left from the Warmaster stuff, as well as a few other sales and it is very satisfying recycling hobby stuff to by more, rather than spending more 'real' money...I aim to do this in the future.