SONS AND DAUGHTERS OF ROBIN HOOD

I've been painting but not blogging, and am working on some Robin of Sherwood figures I hope to post soon. In the meantime here is a Robin Hood song which seems apposite today.

Hope to be back soon, but am working lengthy hours so I can contribute to my oldest son's underfunded school.... funny but I was under the impression I had already coughed up in my taxes.
Posted by Springinsfeld at 00:17 2 comments:

It's been a bit quiet on this blog so I thought I would show these chaps I finished in January. Last year I actually managed to play a game of Lion Rampant with my chum Speckled Jim, and actually rather enjoyed it.....it being simple enough for even my shrivelled brain to comprehend (added to which I won). SJ announced he was starting to paint some Vikings up, so I thought an army heavy in cavalry might be able to run rings about him.

Over the last year or so I have been enjoying watching "Vikings" on Amazon Prime, the producers have made an effort to do some research, and although historically it's complete pants, if viewed as a semi mythical saga, it's actually rather good. However like most popular fiction set in the early medieval period, the Christians get a bum deal and are invariably portrayed as weak, incompetent, corrupt or debauched, or all these things together..... for goodness sake, if they were that spineless how is it they completely crushed almost all vestiges of Paganism in Europe, and we aren't all speaking Danish/Swedish . I blame Bernard Cornwell , a man with a big axe to grind.

Having gnashed my teeth at the blundering Saxon soldiers in "Vikings", the Franks were portrayed as equally timorous, until led by ex-Viking Rollo (my favourite character). The real Franks (and Saxons come to that) were of course just as ruthless and nasty as the Vikings, and Charlemagne did a splendid job of shortening several thousand Saxon prisoners one afternoon after they had upset him (he had them all beheaded).

Although my Frankish army is from the time of Charlemagne (747AD-814AD) rather than the Vikings, I copied the colour scheme from the TV series, with lots of turquoise and gold, and painted them up as semi-mythical, with the heavy cavalry in gilded armour and white cloaks as the Emperor's Paladins. 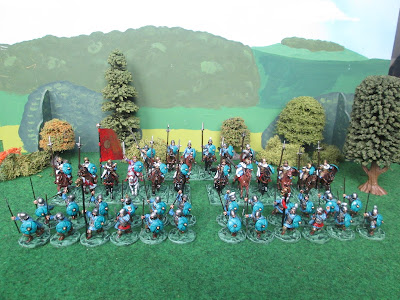 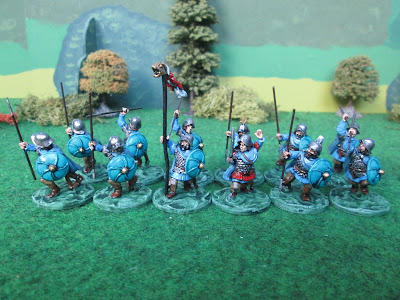 Most figures from Old Glory (one of my favourite manufacturers). The dracos are from Lancashire Games, as the OG ones were a bit weedy. 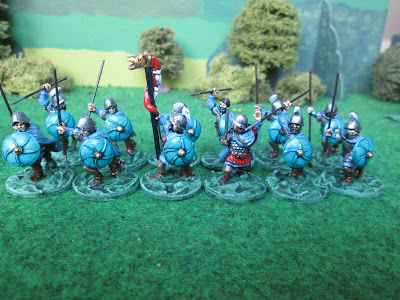 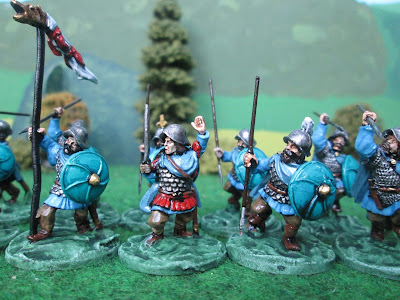 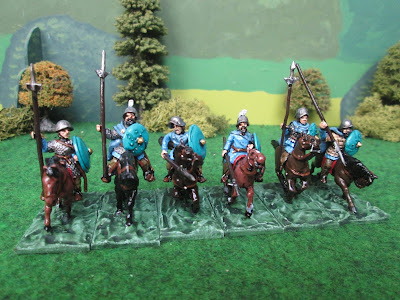 The yeomen were cobbled together from all sorts of odd figures. Some old Essex with head swaps, a pair of Garrison legs with an OG body...this was an army on a budget. The horses are a right medley as well. 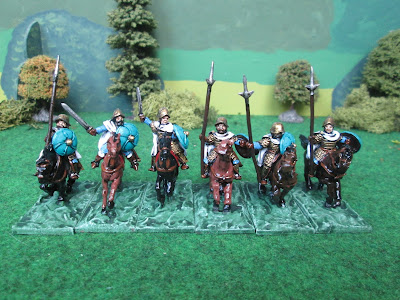 The Paladins were almost all Old Glory, with the odd Artizan figure. The Franks were known for using flanged spears on horseback, so I had to add paper wings to these lances. 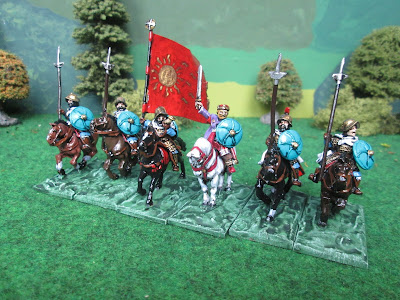 Here's the head Honcho. Roland is carrying the Oriflamme (I am surprised no one does a figure of Roland blowing his horn) 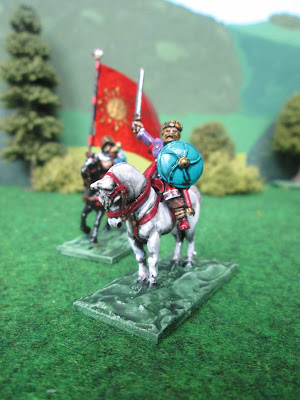 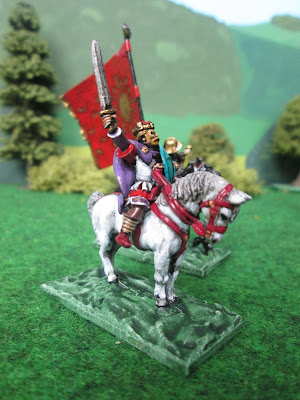 All in all a fun little army to paint. The good thing was there were no figures left over. I bought 1 bag of OG infantry, 1 of cavalry, and an Artizan command pack and scraped around for spare horses for the yeomen.

I was a little shocked I knew so little of Charlemagne, and more surprised by what a colossus he is in the rest of Europe, legends about him and his paladins stretching from Scandinavia to Italy and beyond. Of course, most European countries still treasure their legends and folklore, teaching them in nurseries and schools. I can't see that happening here.  Well worth looking into anyhow. Here's a stirring tune I found about Roland's last stand.

I haven't had a lot of time recently to do any blogging, but have just started again over on my fantasy Blog  . However blogger have been up to their tricks again, a deliberate conspiracy to drive me hopping mad.

Firstly  my dashboard changed from a handy one page with everything visible, to a veritable labyrinth. I have only just found how to access this blog again, the only one being visible was my fantasy blog.

Secondly, my avatar, the chap in the wig (Sanderson Miller the garden architect), has vanished off a number (but not all) of the blogs I follow. I am still officially following them, but the blog owner can't see that.

Thirdly, now when I try and follow (or re-follow) a blog, I have to use my real name rather than Springinsfeld (I would rather remain incognito on the net), and no avatar appears (unless I reload the image). There is no option given to follow privately.

What does it all mean, and why is it happening?
Posted by Springinsfeld at 01:34 12 comments: