Following on my Lovecraftian theme, we took a trip over the Severn to Lydney Park today where there are some lovely gardens and a ruined Roman temple. The gardens of Lydney Park were laid out in the 1930's by Viscount Bledisloe and are open only a few days a year in the Spring when they are looking splendid, colour coming from a myriad range of Rhododendrons and Azaleas. The deciduous Azaleas were wafting their perfume throughout the valley, where there are series of interconnecting pools and streams 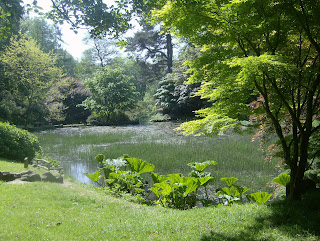 Some fine Gunnera manicata at the waters edge 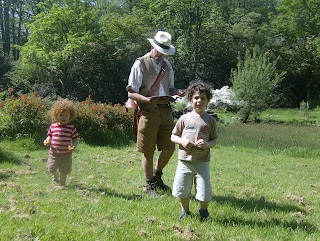 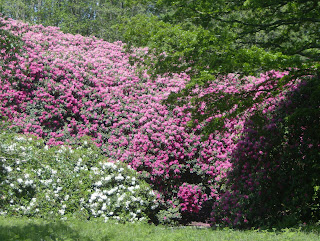 Perched on a hill above the valley are the remains of a fourth century temple dedicated to the god Nodens (a local deity). In H P Lovecraft's tales Nodens appears as a generally genial god who thwarts Nyarlathotep, the Crawling Chaos. The temple was excavated in the late 1920's by Sir Mortimer Wheeler aided by (among others) a young Professor called J R R Tolkien and it seems probable that news of the discoveries reached Lovecraft in Providence, Rhode Island. 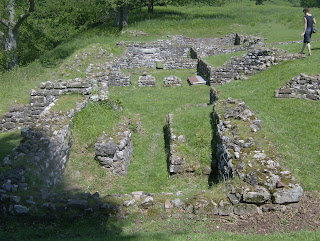 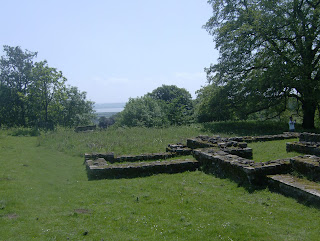 part of the entrance complex with the Severn visible in the background.

Ramsey Cambell wrote a series of Lovecraftian pastiches set in this area of England, creating sinister towns such as Temphill and Goatswood. Strangely the temple was built in the 360's, fourty years after the Roman Empire had converted to Christianity, but then this area has always had a reputation for witchcraft and paganism lingering on. The word witch comes from the old English Hwicce, the tribe that lived in these parts.... perhaps we were lucky to get home safely.﻿

Posted by Springinsfeld at 09:23 3 comments:

What a hectic week. We have suddenly become busy at work (thank goodness) and are pulling out all the stops , buying in lots of lovely plants. The trade is so weather dependant, we are at the mercy of the elements. I also took delivery of a couple of DVDs this week. The X-Files season 4, and The Whisperer in Darkness (latter produced by the H P Lovercraft Historical Society)

, so I have been distracted by a) Gillian Anderson and b) six foot flying lobsters bent on world domination. I was a bit disappointed by the Whisperer having waited 3 years to see this film made, I hoped the HPLHS would have faithfully followed the original story but they turned it into a corny B-Movie with slightly horrific additions. The trailer they made was very good however and promised great things

Either way, eldritch horror has been high on the agenda (particularly this morning tackling George's nappy) and I have started making some scenery for the game Strange Aeons, hoping to make a gameboard based on Lovecraft's story The Dunwich Horror. Work in progress at the moment, but as it is a small project with few figures needed I may even get things finished. The boards for Strange Aeons is only 2' x 3' so it is possible to custom make terrain for different scenarios. 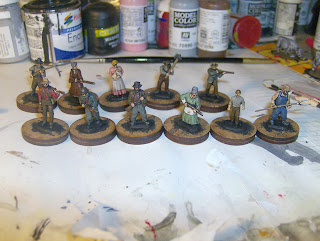 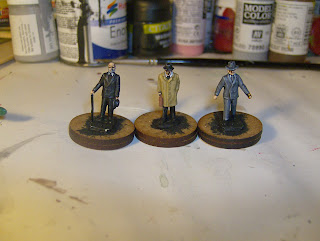 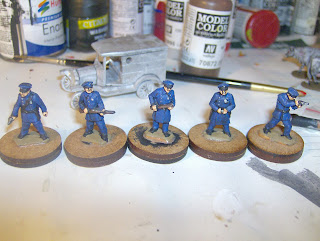 The ill fated policemen (they get eaten) Redbox figures again. 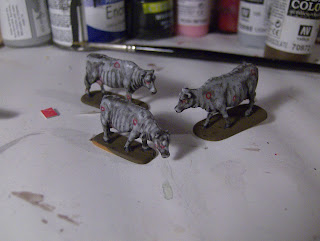 Some of the Whateley clan's diseased cattle (Pegasus figures) 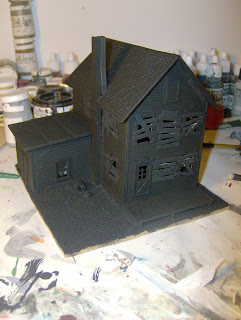 The Whateley House, boarded up to contain Wilbur's twin brother!! 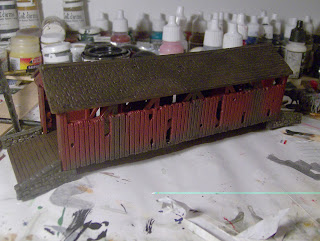 The dark and tenebrous covered bridge that leads to Dunwich 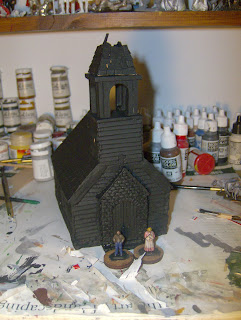 Email ThisBlogThis!Share to TwitterShare to FacebookShare to Pinterest
Labels: 1/72 Call of Cthulhu

if you can, and drink a toast to my old cat Harry, who exited this world on Thursday aged 18. I have had the old feller since 1995 and he had seen me through many ups and downs until I finally settled on an even keel. Of late his life had been less peaceful than he deserved, but he handled the attentions of 3 young boys with fortitude and his usual peaceable nature (never a bite or scratch). The only animal he ever brought back to the house was a bird that had clearly been dead for a matter of weeks. Recently he had been stone deaf and toothless and was gradually losing his sight but soldiered on until he became too ill for life to be much fun. 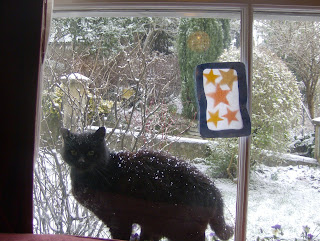 Typically the only digital photo I have of him shows him languishing outside in the snow a few years back at our old house. May you find your way swiftly to the feline Valhalla old chap...

Posted by Springinsfeld at 12:57 2 comments:

Perhaps a misleading post title, as these are not Scots but my next Royalist Cavalry unit. They are however wearing one of my favourite sorts of helmet, the burgonet. Figures from a Call to Arms with Ensign Miniatures heads, and the officer (a great figure) is from Barbican Antiques in Plymouth who now manufacture the old Chota Sahib range (I think). I hope to paint them up to look like Sir Martin Lacey's troop in the old television series By the Sword Divided. 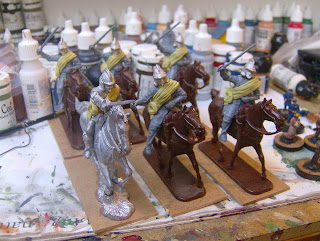 I have been sidetracked into painting some 1/72 figures for a change which can be seen off to the right of the picture for a scenario based on H P Lovecraft's The Dunwich Horror.
Posted by Springinsfeld at 12:06 2 comments: