After a lot of faffing about I finally managed to photograph my first figure from my new 1/72 Conan the Barbarian project. The plan (haha) being that I paint a small force from most of the major nations in Hyboria. I might even get some 28mm figures as there are some great figures out there.

Here is the man himself, ready to crush the jewelled thrones of his enemies beneath his sandalled feet. I have followed the Frank Frazetta approach and clad him in naught but a fur loincloth. 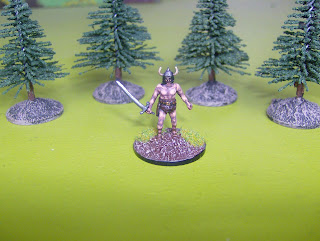 ﻿
He is made from the old Airfix Tarzan figure (now in the HAT Jungle Adventure set) with a head from an Esci barbarian, and a sword and hand from an adventurer in the Caesar Fantasy adventurers box.
I have almost finished some Hyborian Picts for him to battle against and hopefully will get them posted in the next few days.﻿
Posted by Springinsfeld at 11:21