A WHIGGAMORE IN THE GARDEN

Easter is upon us and I was granted a day off from work (will be back at the cliff face/compost heap on Saturday and Monday) so I drove Mrs. Atticus and the 3 sprogs up to stay with her brother in Bedfordshire. On the way back I called in at Stowe Landscape Gardens, somewhere I have been meaning to visit for a long long time. The gardens were started by Sir Richard Temple Viscount Cobham on his return from The War of the Spanish Succession, an he didn't do things by half. The entire landscape is a political statement designed to support his radical Whig ideals (as a pose to those of the then Whig Prime minister Robert Walpole) and to show his loyalty to the Hanoverian Monarchs. 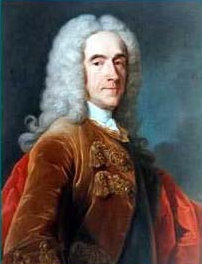 The approach to the gardens from Buckingham is in itself breathtaking (I left the camera with Mrs. Atticus so have had to pinch these pictures from the web). The Corinthian arch in the distance marks the start of the formal gardens. The white lines on the road have been removed which improves the effect. 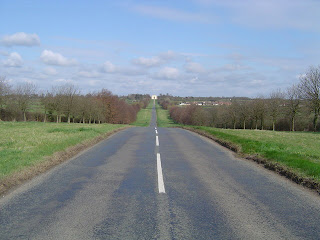 From about the third rise in the road you can see through the arch to the house beyond, which is a bijou little place 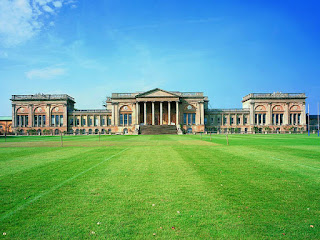 and that's just the back door.
There are too many structures and follies to show them all, but I was particularly delighted by the Temple of Saxon Deities, designed to show that our English roots are wholesome and Germanic and thus it is only right we have a German King on the throne. Since this picture was taken the Yew trees have grown up a lot more, and will soon enclose the grove to form what was then called a 'cabinet' 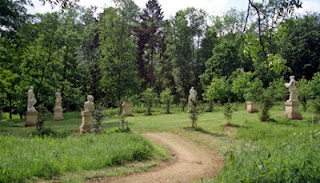 The grotto was also very exciting (if you like that sort of thing) and had a more airy quality than that at Stourhead gardens. 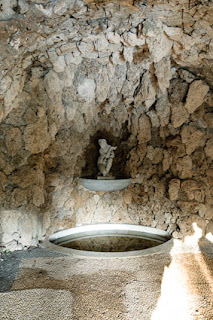 I am usually quick to moan about the National Trust (having worked for them in the past) but they have done a wonderful job in restoring this so far. Originally the tufa stone would have been embedded with glass, quartz, coral and shells making it glimmer in the reflected light or by candlelight.  Next to the pool is an engraved slab
Goddess of the silver wave,
To thy thick embower'd cave,
To arched walks, and twilight groves,
And shadows brown, which Sylvan loves
When the sun begins to fling
His flaring beams, me, Goddess, bring.
All through these 18th century gardens is a theme of Neo-Paganism which nobody seemed to bat an eyelid at at the time. Painswick Gardens in Gloucestershire are really an enormous temple to Pan.
The Temple of British Worthies is probably the most iconic monument in the gardens 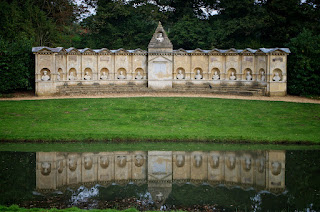 and finally more Germanic chest beating in the form of the Gothic Temple. Gothic at the time meaning pertaining to the Goths who gave those corrupt and decaying Romans the old heave ho (much like the Hanoverians to the Stuarts) 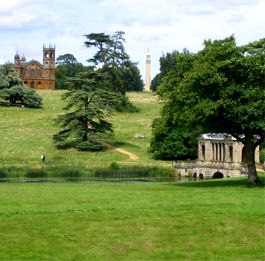 The Gothic temple is the brick structure designed by Sanderson Miller (the chap in my avatar pic). In the foreground is the Palladian bridge (the Renaissance architect Palladio being considered the most perfect during the eighteenth century) and Lord Cobham's Pillar in the distance, erected by his grieving wife.
All in all my boat was completely floated. I still prefer Stourhead Gardens, but either would make a great place to hold a mini Imagi-nation campaign﻿
﻿
﻿
﻿
﻿
﻿
Posted by Springinsfeld at 14:49