BACK TO MY ROOTS

Well, here we are after 4 months absence, and I can only offer my apologies for my lack of blogging and more importantly commenting on the jolly good blogs I follow. We have had a busy summer (and good holiday back in August), and I have been pressing on with a few projects, including building some terrain boards for Robin who is now well and truly into our wonderful hobby of playing with little toy soldiers. I have taken him to 3 wargames shows over the past few months (Colours, Warfare and Reveille in Bristol) where we picked up loads of cheap secondhand figures for his collection. This has reminded me of how I started off gaming with metal figures, after the Airfix days, mainly playing Dungeons and Dragons and poring over White Dwarf back in the late 70's early 80's. I dug out my old White Dwarfs (happily I kept them all from 1-150) and thought about having a bash at building the forces for the Warhammer scenario Thistlewood in WD 45 , those happy times when Games Workshop let players use their imagination and any figures they could get their hands on. I tried to do this in 1983 but one can't get many figures on the earnings of a paperound which was the only income I had then.

Here are a unit of loyal Dwarfs (Dwarves) which I based about 10 years ago but never painted, figures mainly Dixon with a few Irregular thrown in. I have put them in a sort of uniform as they are meant to be part of a mainly human army, and the standard depicts the Sun in Splendour of Trompenburg, my ever present fantasy state. If I get around to painting the rest of the army they will be wearing the Maroon and Green colours of Tromenburg as well. 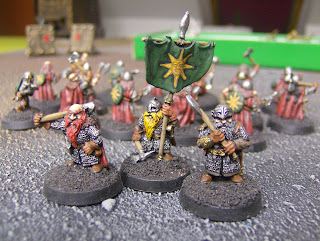 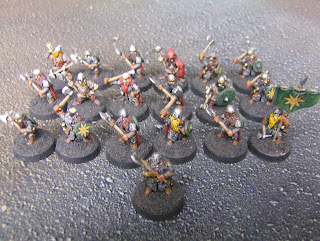 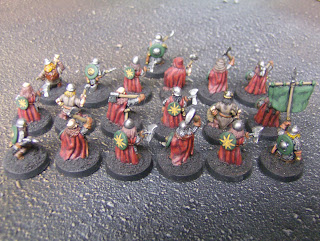 I can't quite decide how to finish the bases, so may leave them until I have more figures done.

Posted by Springinsfeld at 15:06

Email ThisBlogThis!Share to TwitterShare to FacebookShare to Pinterest
Labels: Oldhammer