which set me thinking about my favourite Christmas story. I am a devotee of good ghost stories, so I think I would go for (perhaps predictably) The Story of a Disappearance and an Appearance by M R James. The story takes the form of a series of letters describing the search for the clergyman uncle of the writer who has gone missing at Christmas time. In one of the letters he describes a horrifying dream in which a demonic Mr Punch appears

" after it (the murder of one of the puppet victims) Punch came and sat on the footboard  and fanned himself, and looked at his shoes, which were bloody, and hung his head on one side, and sniggered in so deadly a fashion, that I saw some of those beside me cover their faces..." 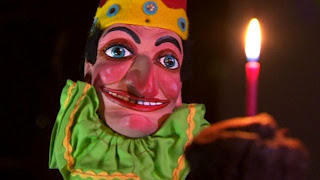 Another great ghost story, perhaps less disturbing, is For the Local Rag by A M Burrage, which has at least some Christmas sentiment and good cheer in it!

Posted by Springinsfeld at 00:44