I've been taking stock of mountains of old school lead that reside in the attic, wondering how I want to progress with my own armies. Simple , shiny and medieval sum it up. This got me thinking about the influential films which I saw as a youth which filled me with fervour to recreate the armies portrayed in miniature (not that I have done yet, but there is still time hopefully)

The look of the troops in the following stills is the sort of look I would like to recreate. A lot of the armour has that brushed steel look, plenty of colour and no mud or grime in sight 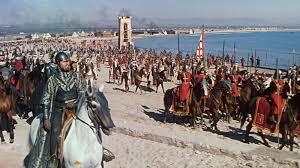 above are 3 stills from El Cid. What a fantastic film. The battle scenes still inspire me.

These 3 above are from the 1960 Polish film Krzyzacy (Knights of the Cross) about the battle of Grunwald in 1410. I can't remember where these 2 are from, but the soldiers in the picture directly above look just like Revell/Accurate medieval figures. 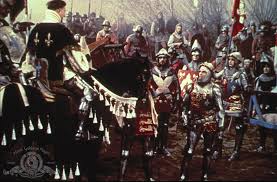 2 stills from Henry V . The charge of the French knights was rather splendid.

Any other suggestions of similar films?

Posted by Springinsfeld at 05:32